Can we repair this Singer Car Radiator?

A brief history of a recent recore on a Singer motor company radiator.


Very often at Motoradsonline we get contacted to carry out work on classic and vintage radiators. The pictures and description below are typical of the kind service we provide. 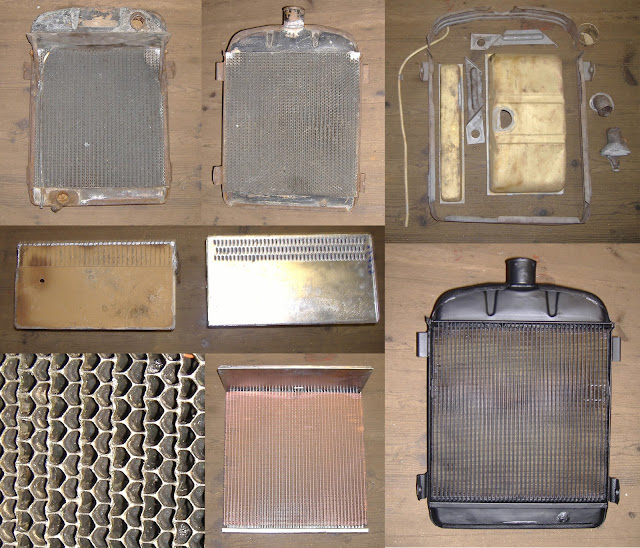 Top left shows the radiator as it arrived with us. First tests showed that the filler neck solder was split and there were a few major leaks in the core. We had to seal these leaks first to get some pressure into the rad and check out the rest of the core. Unfortunately all that this did was to show that the rest of the core had more leaks than it would be possible to repair. This radiator had reached the point, after many years and previous repairs, where it would need to be fully overhauled.
This gives us several options and decisions for the customer. Do we want a modern equivalent core or do we want one with the pretty fin pattern shown above?  Our speciality is the modern equivalent but the original type core is still available for a customer who wants it. The major stumbling block for this type of job is always price and whilst we wont go into exact costs lets just say that the difference is about £1000. This is down to the fact the core has to be made specially for this job and is very expensive. There is a 'dummy' cover you can get which is 6mm thick and goes over the front of the radiator to give the original fin pattern, this is a much cheaper option at around an extra £150.
The Radiator was stripped down to its component parts and they were cleaned back to bare metal, any major dents or splits can be repaired at this stage. The new core arrived and you can see that it has straight flat fins and a different water tube configuration, this will work better than the original.
After several hours of careful soldering and reassembly the radiator was ready for final inspection, testing and spraying.
Using a modern core will give a very efficient, reliable and economical result which we can do it in a matter of days. This method may not always acceptable to the customer for many reasons, but if you are willing to wait six to eight weeks for the core and pay an extra £1000 then we can arrange that too.

Posted by Motorads Online at 05:12 No comments:

My Morris Minor Radiator is Blocked

This job was like a reminder of the past as its been a while since the last time we worked on a Morris Minor radiator. Many years ago they used to come in as regularly as a Volkswagen Golf radiator might come in today.
This particular vehicle was over-heating and the customer suspected a blockage in the radiator. A quick inspection and a few tests confirmed that the core was blocked beyond repair and although the radiator itself looked in quite good condition there was no alternative but to fit a new core.
The radiator was stripped into its component parts and these were then cleaned back to bare metal. As you can see from the picture the water tubes in the old core were pretty well blocked.
Once the new core arrived all of the parts were soldered back together and after a final inspection and test the radiator was sprayed black to look as good as new.
﻿
Posted by Motorads Online at 03:56 No comments: